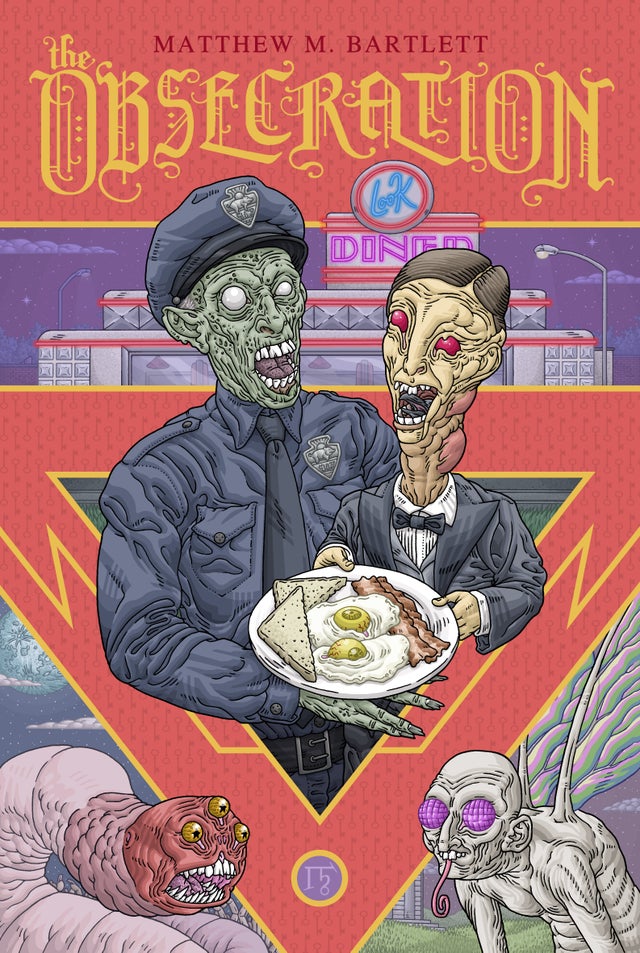 Broken Eye Books is publishing The Obsecration by Matthew M. Bartlett. It’s Leeds. It's 2018. And the patrons in the Look Diner await their meals, drawn by something greater than hunger, something stronger than the need for shelter from the oppressive heat and humidity of summer. Waitresses hustle. Cooks sharpen knives and light burners, giving birth to blue blossoms of flame. Something is happening tonight. Something is stirring in the greased air sliced by whirling ceiling fans. You and I, we have a corner booth. A front row seat.

Abrecan Geist. In Leeds, Massachusetts, the name evokes dangerous magic, unspeakable blasphemies, black rites in the basement of Anne Gare’s notorious book shop. Outsized rumors surround him. He lived a full three hundred fifty-eight years, dying in 1982 and taking to the casket the cadaver of what appeared to be a sixty-year-old man, and he could speak to birds. He and his coven, the Hilltown Ten, were responsible for the notorious priest murders and disappearances of the early 1980s. He could bend reality to suit his will. And in his later years, his dreams took over, warping reality even as he slept.

Something is going to happen tonight, here, in the Look Diner in Leeds, Massachusetts. Something devilish. Something unnatural. All will play a part. You and I? Though we are but observers, we may not live through the night. But we will see something no one has ever seen before. It might be starting soon. Yes . . . the lights are flickering. The ceiling tiles are bulging like brown-stained bellies. The yolks of the eggs on my plate are filling with blood, and my water is boiling in my glass. Don’t look away. Don’t even blink.

What does all this have to do with our favorite occultist, leader of the Hilltown Ten, dreamer, diarist, monster? Sit tight. Soon all will be revealed.

Pre-Order. Order now and receive your book as soon as it arrives from the printer. Estimated to ship this spring.